UPDATE: THE RICE WAS PLANTED! AN UPDATE TO PLANTING RICE UNDER FIRE

Our reporters fromFree Burma Rangers stated on JULY 23, 2021 the Following:

By God’s help and the courage of our widow friend, Naw Thraw Gay, and her neighbors, the Karen villagers we reported on back on July 1 were able to go out to their fields at night and plant the rice with no lights and were not seen or shot at by the Burma Army. All the rice was planted and this is a thanks to God and all of you who prayed for this widow.

Last year I shared in churches and with friends a photo of villagers planting rice in their fields very close to a Burma Army camp. I described how courageous they were to face that threat and how they were a wonderful example of standing strong in the good things God has given (their land and livelihood) despite challenges.

On this trip, one afternoon after a kids’ program a lady came to tell us that she was in that same situation of having a field directly beneath the Burma Army. She was really frustrated because for several days she and friends had been shot at while planting their rice. That morning, the Burma Army had fired machine guns at her and she had barely escaped with her life. “Bullets were hitting the flooded paddy all around me, less than a foot on each side of me, as I ran for my life into the jungle.”

We had actually heard the guns while our GLC program was going but didn’t know what was happening – unfortunately, it’s not unusual to hear shooting here. She went on to tell us she was a widow with five kids and might need help to buy rice because she had given up trying to plant her own. She was a strong lady, a vivacious spirit, and occasionally laughed while sharing her impossible situation. Dave listened and asked questions as she was being interviewed and then, after some silence, said, “What if we helped you? What if our team tried to plant with you?”

She laughed and said it was impossible and all her resolve was gone to go back there again. Dave said, “What if you just show us your field. You don’t have to go – and we can try something. Maybe we’ll get nowhere, but we can try. We’d like to help you by trying.”

She shook her head, meaning ‘impossible,’ but agreed to show us the field. As we looked into her eyes, Dave’s offer felt like a real help. Why not go into that place with her? I had said many times that we should not surrender to fear but go confidently toward the goodness God has given us (again, speaking of the challenge of these villagers just living their normal lives), so why not put that into action in this situation? It was scary, but had the potential for a much greater good. What if we really could change the paradigm of constant fear and oppression to one of goodness and hope. Maybe God would do a miracle and we actually could make a real difference. 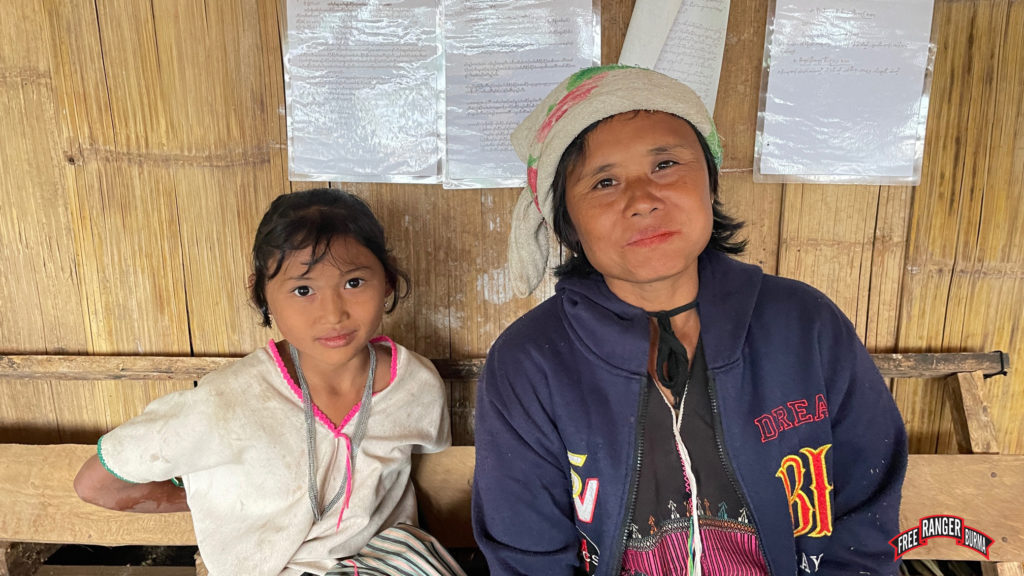 I always tell the Rangers to ‘leave more faith, hope, and love’ in a village than was there when we arrived. Dave looked at the falling rain and said, “The visibility is much less than this morning, so we might have a better chance than you did. If it doesn’t work, we’ve tried our best.” So, our family and team followed her to her rice field. Once again, we were walking that line of laying our lives down but as usual, despite the uncertainty, it felt good and right and true for us. I prayed that God would give us all his Psalm 91 covering, that her planting and harvesting would be fruitful and that in some way we could be God’s instruments of change in the present reality.

We arrived to a house next to the fields that were situated below a hill the Burma Army held. Dave told the kids and I to wait at the house while a few of our team went into the field to start planting. If all went well, he’d call us and we’d join in planting, ready to run away if needed.

In what seemed like only five minutes, a volley of gunfire resounded, the sounds of bullets impacting coming quite close to where the kids and I were waiting behind bamboo and other cover next to the house. One round hit the dirt about 10 feet to my right. The Karen soldier I was next to said, “Let’s get out of here,” and I followed him below the house into a creek bed where the lady was hiding in a well-prepared bunker dug in the side of the embankment.

Suu, and Peter joined us right away and in another few moments, after we called several times, Sahale answered that she was OK, watching from the next stand of bamboo along the embankment. Had anyone out in the field been hit?

I kept looking at the lady, incredulous at her situation, and at the same time praying against the Burma Army and for our team. This was unreal! And yet, in the gracious, enduring, comical Karen way she was saying, “I told you so!” We sat there for maybe five more long minutes, waiting to hear voices indicating they had returned and at the same time appreciating the lack of yelling for evacuation. She smiled and laughed as she talked to us. She had friends calling her on her cell phone while we were hiding. She told them, “The Americans wanted to try and help me. They’re crazy and we’re all here together.” She laughed more and then hung up.

When I did hear Dave’s voice just above us, we stood up to see the team there in the clearing in front of the house where we had just been. Joseph walked back from the field as the last few shots came in. I couldn’t believe it. The Burma Army aggression towards the farmers was intense and directed. She had told us in her earlier interview that it seemed they followed her with their shooting as she tried to run away. We realized we couldn’t help as we wanted. How to help her and the other families whose fields were under threat? Dave was committed to making a real imprint on the situation and snuck back out to the field to successfully plant a clump of green shoots in her paddy field. I picked up a piece of bamboo that I plan to keep as a reminder to especially pray for her and her children.

It was then that we understood this house wasn’t just a field hut but her permanent house where she lived with her children. Imagine, living in a house within range of arbitrary gunfire. We thanked God for His protection of all of us and for his very real and present help for those people. We prayed that the Burma Army there would change their hearts or fall.

It was a pretty despairing moment realizing that this was her life – with children. As we walked back to the village we passed by the other families in houses in very similar predicaments. Yet I was thankful we were given the opportunity to step into Naw Thraw Ghey’s life, to share the peril she faces, and to be an eyewitness to her life in the “valley of the shadow of death.” I pray that Psalm 23 will truly be a peaceful reality in her lifetime. When I heard she was able to plant the rice at night later, I was grateful and thanked God.

In the Amy Carmichael book I’m reading there was this quote, from one of their volunteers who witnessed temple prostitution, that seemed relevant to the situation in which we found ourselves: “What words can ever tell what the place is like where Satan’s seat is? It is like nothing but Satan himself…. It was as though the flames of hell itself came up and scorched away the daub of respectable missionary Christianity with which our eyes had been blinded and our comprehension dulled.” Coming face to face with the evil of the Burma Army’s senseless desire to kill had burned this woman’s family and situation into our hearts in a visceral way we would not soon forget.

Civilians on the Run in Karenni State, Burma

One-third of Kurdish voters to boycott the upcoming parliamentary elections

Trump’s Supporters Protest at US Capitol

Under the slogan “Let’s read every day”, The National Book Festival to kick-off